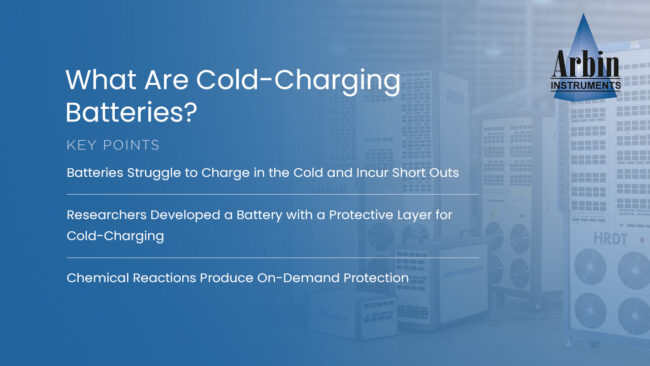 Cold can be a threat to car batteries. Drivers in below-freezing temperatures routinely must deal with dead batteries that need a jump. However, researchers at Penn State University developed a solution to this problem. The new battery they developed has an extra material layer that enables cold charging.

How the Cold-Charging Battery Works

There are many components to the cold-charging battery that make it unique and able to function no matter the temperature. Here’s a breakdown of how it works.

The battery contains a Self-Assembled Monolayer (SAM). A SAM is a one molecule layer thick piece of material that bonds to a surface due to chemical forces during a deposition process. Post-deposition, a chemical bond occurs to the surface, leaves the substrate permanently modified.

In the cold-charging battery, the layer consists of electrochemically active molecules, which decompose into the components required to protect the surface of a lithium-metal battery anode. This new type of battery has a lithium anode, a lithium metal oxide cathode, and an electrolyte. The electrolyte houses the lithium-ion conducting material and the protective, thin-film layer.

Without the protective layer, the battery could grow lithium crystal spikes, known as dendrites, if charged too quickly under cold conditions. These dendrites, which have been the cause of lithium-ion battery explosions, would eventually lead to a short out of the lithium-metal battery. The consequence would be a decrease in the lifetime of the battery.

The layer functions on the surface, which tunes the molecular chemistry there to counteract this occurrence. The SAM offers a stable electrolyte interface as its charging, which protects the lithium anode. The SAM sits atop a thin copper layer. The lithium then strikes the monolayer during charging, later decomposing to create a stable interfacial layer.

The decomposed part of the original layer reforms on top of the lithium, hitting the copper and remaining layers. These reactions produce on-demand protection for the lithium, preventing dendrite formation.

The researchers at Penn State developed the concept for automobiles. They also noted that such a battery could have other applications, including drones or battery-powered equipment used underwater or below freezing temperatures.

The innovation thus far has limitations. It can only charge a few hundred times. The inventors achieved the objective of improving the battery’s storage capacity and preventing dendrites, but they note it needs more research before it’s commercially viable. Should it become mass-produced and available, it has the opportunity to disrupt the lithium battery landscape with a better product.

As a partner to the battery industry, Airbin Instruments will continue to follow the cold-charging battery’s progress. Learn more about Airbin’s capabilities in high-precision battery testing.