How a Good Coach Can Advance Your Career

On this episode of I Don’t Care, host Kevin Stevenson talked with Steve Loveless, Executive Coach, about his career in healthcare, which began as a fellow working with Stevenson in Oklahoma. They also talked about leadership and taking risks.

“Those early activities, as they pulled me out of the fellowship and into the role of value enhancement, and the efforts to understand what brought value to healthcare” – Steve Loveless

In his first role as a fellow at Good Samaritan Hospital in Oklahoma, Loveless learned the importance of vision. He noted that the leadership at the time had a vision, and they were willing to take risks. This is a value that’s important to healthcare, according to Loveless.

These leadership examples early on in his career would have an impact on how he would lead.

“Those early activities, as they pulled me out of the fellowship and into the role of value enhancement, and the efforts to understand what brought value to healthcare,” Loveless said. “Then to break it down and to pursue action plans in each of those areas and drive value further was the groundwork for the activities that I’ve been driving in my organization.”

As he heads into the next phase of his career, one in which he’ll focus on the development of others, specifically leaders and future leaders, as an executive coach.

Listen to learn more about leadership, risk-taking, and coaching. 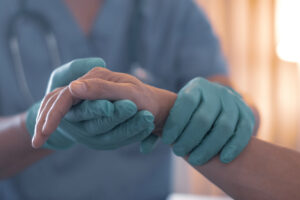 5 Ways Healthcare Organizations are Using SDOH to Make a Difference

So much of our overall health is impacted by various socioeconomic factors, which don’t involve ever stepping foot into a doctor’s office, clinic or hospital. Social determinants of health—commonly referred to as Read more