Apple’s Car Is Beloved Before It Even Exists

(Bloomberg) — If semiconductor shortages, recession risks and the once-a-century shift in propulsion weren’t enough to keep auto executives up at night, here’s one more sleep disruptor: Consumers are keen to buy an Apple car before one even exists.

Strategic Vision just released the results of an annual study that this year reached 200,000 new-vehicle owners. For the first time, the consulting firm included Apple among the more than 45 brands it surveyed consumers about. The findings: 26% said they would “definitely consider” buying a set of wheels from the iPhone maker, behind only Toyota and Honda. And 24% ticked the top box (“I love it”) when asked their impression of the quality of the brand, beating all others by a wide margin. 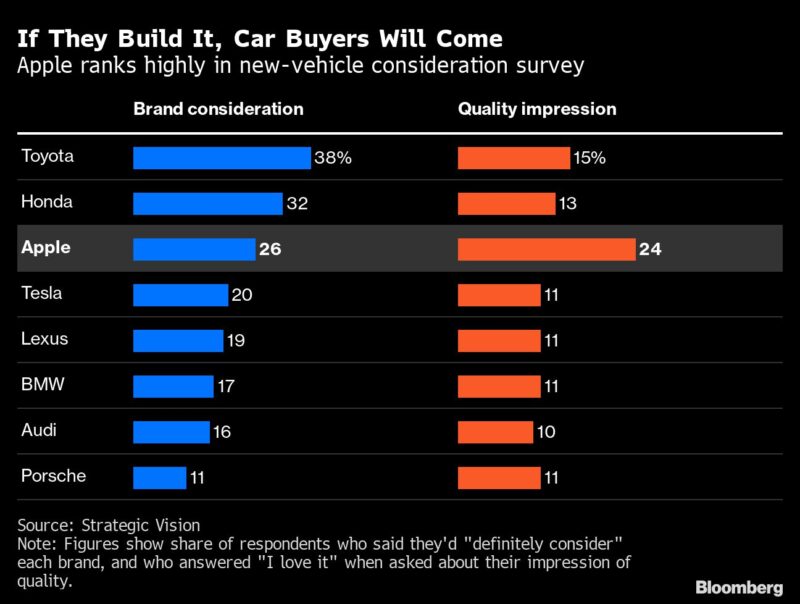 That’s serious brand power and suggests there would be significant appetite for autos alongside all those phones, computers, watches and television boxes.

Whether Tim Cook will actually green-light a product for all these prospective buyers is still unclear. “We’ll see what Apple does,” the chief executive officer told the New York Times last year. “We investigate so many things internally. Many of them never see the light of day.”

Bloomberg’s Mark Gurman has reported Apple is shooting for a fully autonomous electric car and aims to have one ready around 2025. Many companies working on self-driving technology have been unable to deploy robotaxis on the timelines they targeted, and only a handful are offering ride services in select cities. The National Highway Traffic Safety Administration keeps having to remind Americans that no vehicle available for purchase today is capable of driving itself (hear that, Tesla owners?)

Autonomous or not, an Apple car could be a formidable force, especially given the amount of tech consumers want in their new vehicles and the challenges incumbents have had meeting those expectations (see Bloomberg’s feature story yesterday on Volkswagen’s software woes.) Cook employs legions of coders capable of developing the brains a modern electric vehicle needs to manage battery power and navigate traffic. The company also owns all sorts of content that could be piped into dashboard screens, assuming passengers will be able to safely avert their eyes from the road.

For the time being, at least, Apple lacks an industrial partner. But one of the companies it knows best — iPhone assembler Foxconn — recently acquired a former General Motors assembly plant in Ohio from struggling startup Lordstown Motors. That factory is big enough to easily make 400,000 vehicles a year.

While there are already plans to make Endurance pickups for Lordstown and an EV called the Pear for Fisker, both those companies are unproven startups. There may be plenty of space for Apple in that factory’s future.

Strategic Vision’s study indicates automakers already having issues responding to the competitive threat posed by Tesla could be in for another menace. But Elon Musk also ought to take notice: More than 50% of Tesla owners said they’d definitely consider a future Apple vehicle. “Everyone should be prepared,” Strategic Vision President Alexander Edwards says.

Key Insights: The supply chain begins and ends with drivers A driver shortage would be felt by people and businesses across the globe People’s idea of a trucker does not always reflect the reality of the Read more