As we look towards the future, one of the big challenges facing humanity is the overcrowding of some of the major cities around the world. As the trend of urban migration continues, this issue is brought into focus in countries like China. Paul Doherty of The Digit Group joins this episode of the podcast to talk about how Smart City technology can help solve this issue.

We also chat with Eric Peterson about airport architecture and how cities can make a good first impression when people first step off the plane.

MANEUVERING THE CHALLENGES OF AIRPORT ARCHITECTURE

What sets a city up for a great first impression? It’s not the landmarks, or the people, or the food. Realistically, nothing sets a first impression quite like a city’s airports. For visitors, it’s the first representation of the culture, style and feel of the community they’re about to explore. For residents, it’s a hub of travel; a welcoming point of departure to the outside world.

It’s no surprise that these upgrades come at a high price point, and bigger bills means bigger stakes. Take Mexico City, for example. A $13 billion international airport scrapped after a referendum, leaving local architects puzzled and upset. Barring the political nature of the cancellation of the project, it all raises some important questions for AEC professionals. How do you aim to build something permanent and functional that is representative of what the city culture wants and needs, especially when it’s a publicly funded project? How do you prepare for the unexpected, when city governments approach you with suggestions, alterations, or cancellations?

We sat down with Eric Peterson, Principal Architect & Head of Aviation for Alliiance, one of the nation’s top airport architecture firms, to ask these questions and maneuver around the common pitfalls that come with such large scale, publicly funded construction projects. “One of the things that I think is problematic, is when designers and planners or even airport leaders lose track of what the common good is, and get lost in the aggrandizement of their vision as opposed to the collective vision,” Peterson said.

Peterson also analyzes some of the biggest trends in airport architecture that are pushing for more accessibility and more authentic experiences, and how it all encompasses a “cohesive message.” “Something that could be around for 50 years in society…there’s been a lot of talk around authenticity, the importance of that. And I think in the airport environment and the relationship to a community, that’s equally important,” Peterson said.

How Mass Migration is Pushing Smart City Technology in China

Mass migration into urban centers is causing overcrowding in some of the largest cities in the world, specifically in China. How can smart city technology begin to help solve that problem? Paul Doherty, the Founder and CEO of The Digit Group, joined the podcast to explain the solutions and where they’re heading in the future.

“The idea is to provide these environments for great innovation…so that people will feel comfortable enough to start to settle down and raise their families,” says Doherty. The goal here is to add this technology to the less populated cities so people can build comfortable lives there, rather than moving to the already overcrowded city centers. 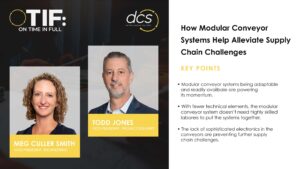 Modular is having a moment and the motivations are clear. Modular is easy to assemble, adaptable and avoids supply chain disruptions. Now, Designed Conveyer Systems offers a modular conveyor system Read more