What Thanksgiving Week Means for Retailers

While the calendar has not yet turn to December, the holiday shopping spree is about to hit its peak.

The five days between Thanksgiving and the following Monday mark the one of the highest volumes of shopping sales for the entire year in the United States.

The NRF projects the total spend to fall between $727.9 billion and $730.7 billion. Of that total, the NRF estimates online and non-store sales to contribute between $162.6 billion and $166.9 billion, which would be 11-14 percent higher than a year ago.

To determine this figure, the NRF uses an economic model that factors in indicators such as employment, wages, consumer confidence, disposable income, consumer credit, and previous retail sales.

This week will contribute largely to a November-December spending total that the National Retail Federation (NRF) expects to increase 3.8 to 4.3 percent compared to the same time last year. The total spending figure is a holistic look at money spent in these two months, meaning purchases at gasoline stations and restaurants are included along with gift items.

According to the NRF, 165.3 million people are likely to shop between Thanksgiving Day and Cyber Monday.

Because the outlook for holiday shopping is strong, retailers are preparing accordingly. Particularly, this means hiring additional seasonal workers. The NRF forecasts between 530,000 and 590,000 new hires to be made during the holiday season. In 2018, 540,000 such hires were made, according to the NRF. 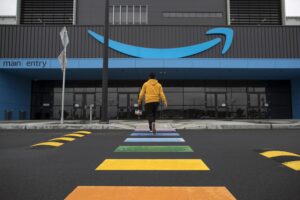