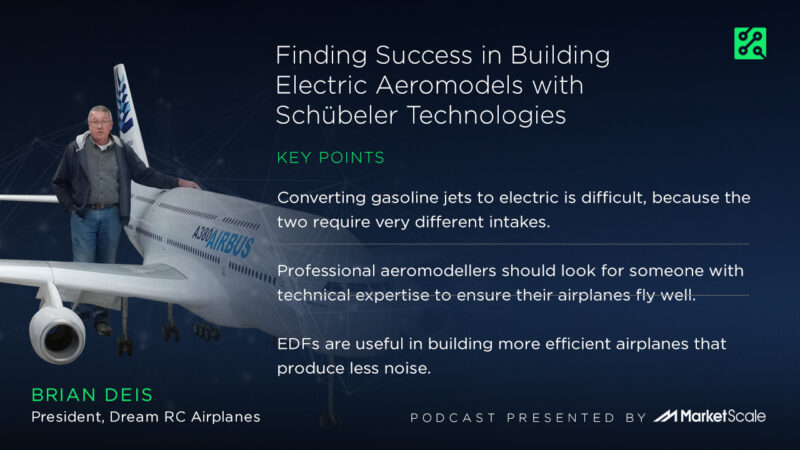 Most people can only dream of turning a beloved hobby into a profession. Brain Deis, however, was able to turn that dream into reality.

After spending much of his life building model airplanes and competing on the national stage, other careers eventually forced him to put his hobby on the sidelines. But, in 2000, all of that changed when he got back into the industry.

Today, Deis is the president of Dream RC Airplanes, an aeromodelling company specializing in high-end electric RC jets. He joined host Daniel Litwin on the MarketScale podcast to talk about his success with electric models and how Schübeler Technologies has helped his team along the way.

Although he first started out building IMAC and wood airplanes, requests from clients encouraged Deis to “shift to higher-end markets, which really meant airplanes that weren’t made in America. The really good composite airplanes tended to be from Europe.”

Many of his new customers liked larger planes but didn’t like gasoline, which meant his team had to pick up the knowledge as they went.

“As we went forward, we learned how to do the measurements, and that’s where Christian and everyone at Schübeler came in. We didn’t know what those numbers were,” Deis said. “They worked with us over the years to make sure we knew, because those numbers aren’t simple at all.”

In addition to his years of expertise, part of Deis’s success can be attributed to Schübeler Technologies’ support.

“It’s subtle how you got about putting it all together and, I think, if you try to do it without someone who’s real good on the technical side, you’re probably not going to produce an airplane that flies very well,” he said.