From cutting-edge design to research ambitions, Are We There Yet? hosts conversations with a plethora of people and companies making waves in the transportation industry. Most recently, Grant Harrell chatted with Ed Warnock, the CEO of the Perlan Project, an aerospace and climate-focused human-flight glider, about the internationally-celebrated research project.

As the world’s highest, sub-sonic wing-borne human flight, The Perlan Project has been awarded numerous recognitions, including mentions in the Guinness Book of World Records in 2017 and 2019, as well as recognition from the Royal Aeronautical Society.

Warnock has spent nearly 12 years with the project and aims to take the organization even higher (literally) than the 90,000 feet it has already accomplished. The research plane is zero-emissions and is a glider that flies into the ozone hole to study how stratospheric mountain waves and the polar vortex impacts weather and high-altitude flight safety.

“We rely on special conditions that only exist in a few places around the globe and only exist a few days out of the year. So, we’ll be down looking for stratospheric waves that extend to the top of the atmosphere,” said Warnock. With an attempt planned for about a year from now, the Airbus Perlan II is set to take off from southern Argentina, to see the Pacific and Atlantic Oceans concurrently while reaching new heights.

Although original thought leaders believed flights in the stratosphere would be smooth, with the weather and bumps all taking place below, the reality is much different.

“Well, under the right condition, when the polar vortex interacts with mountain waves down in the troposphere, they will propagate up through the tropopause into the stratosphere and then to the top sometimes into the atmosphere…In fact, the biggest waves on the planet are not in the ocean, they’re in the stratosphere.” With waves over 100,000 feet high, the stratosphere carries more than meets the eye and The Perlan Project team will soon attempt those waves in their innovatively designed glider. 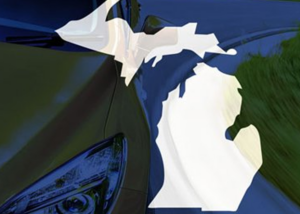 Host Grant Harrell welcomed Charlie Tyson, a Technology Activation Manager under the Michigan Economic Development Corporation to Are We There Yet? to discuss Michigan’s initiatives in transportation Read more