CalTV: Moving from Dangerous Manual Tasks to Automation with Material Removal (Part 1 of 2)

It’s double dose time on CalTV. Joe Gemma sat down with Carl Doeksen, Global Robotics & Automation Director at 3M, for an in-depth discussion on moving from dangerous manual tasks to automation that proved so informative it took two episodes to squeeze in all the valuable information.

Doeksen, a thirty-year veteran at 3M, began his career with 3M in finance. After a few years, he moved into marketing, which took him to global locations. During a several-year stint in Shanghai, Doeksen got his first taste of the automation revolution. 3M recognized the critical role robotics played in manufacturing and asked Doeksen to lead their efforts in robotics. “I’ve been doing that since 2017,” Doeksen. “I could go on and on about my love of robots and how I got into it.”

As a board member of the Robotics Technology Sector Board of the A3, Doeksen’s broad perspective of the dynamic changes in the industry and the challenges, one of which is the limits of available workers in many vital areas. “When I visit customers, post-pandemic, or even during the pandemic, it’s been exacerbated,” Doeksen said of the worker shortage. Customers tell Doeksen that when they find workers, they cannot retain them. “The other thing that’s going on is the long supply chains that have been developed over the years.” Customers need local service, supply, and inventory to provide for their plants worldwide.

Using automation solutions for material removal is something Doeksen said began to gain traction over the past decade. “It’s an application that has a bright future. And it’s not easy, but there aren’t many people who can do it.” These functions are close-quarters operations, and the need for social distancing accelerated the need to find ways to automate these material removal finishing procedures. 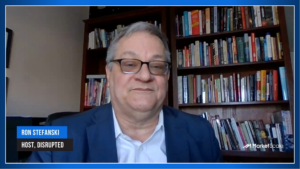