The co-CEO and co-founder of Biggby Coffee, Mike McFall, talked with host Barbara Castiglia of the podcast “The Main Course,” about the rise of his coffee chain. Founded in Lansing, Michigan over 27 years ago, today Biggby Coffee is one of the most popular coffee chains in the Midwest region. McFall said decades ago he took a leap into an industry that was fairly new. Brewing a coffee business from the ground up took a lot of work, and more importantly, it took even more for two business partners to know they could expand and operate their company under the franchise model.

“It was a natural fit for my partner and I. We both tend to lean into being teachers, we love working with other people as partners, and the franchise business model is very much that,” said McFall.

Under the mentorship of Fred Deluca, the founder of Subway franchise, McFall added that they were able to see the positive benefits of franchising, and why the framework allowed them to significantly grow. Owners of Biggby Coffee franchises are equipped with their own skill sets in the making of a thriving business, and McFall said he favors that above all.

“Franchise owners, locally, they’re not your employees, that is for certain, and they’re independent business people … all of them come with some degree of success in another arena,” said McFall. “They’re very experienced people and we really like that. There’s a lot of energy in the franchise business model that way.”

Another highlight of Biggby Coffee’s success was their take on menu item names, opting for creative terms for their lattes that often incorporate pop culture terms, such as Caramel Marvel. But a major highlight for the company came at the height of their business boom. Initially called Beaner’s Coffee, about a decade into operations, McFall and his partner realized they needed to change the entire company’s name. Unfortunately, the former portion of the original business name is also an ethnic slur for Mexican-Americans.

“It was something that we obviously weren’t aware of originally right when we formed it, we became aware of it very quickly.

After much discussion between himself and his partner, McFall decided that the name change would occur and every location they had would become Biggby Coffee. He said his eyes were opened and “it just became very apparent that you don’t want to have a name in any way derogatory toward anybody,” McFall said.

However, the name change process contractually required the franchise owners to foot the bill of the cost of the change that needed to be reflected in signage, and the price tag was quite hefty. But it was a commitment he was willing to abide by and McFall shelled out almost $1 million to ensure that all Biggby Coffee franchises were under the new name.

McFall stated that the franchise business model was the best decision for his company. Although he claims not every franchise owner can have a positive experience, and has had some challenges in the past, he added that to guarantee a lucrative franchise company is knowing the best types of partners to collaborate with.

Creating the Roadmap for the Digital Restaurant

With the rise of gas prices around the country, it’s not unsurprising to see the price at the pump and inflation starting to affect other industries, including the restaurant industry. Often one Read more 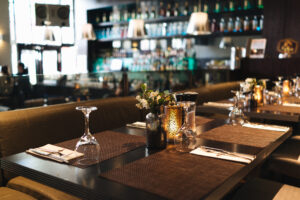