How did a Texas boy, who swore up and down he’d never leave Texas for Oklahoma, wind up involved with the data storage industry in Oklahoma? Chris Brown, CTO at Uptime Institute, isn’t 100% sure himself, but spending the past 25 years in the Sooner state means something went right. And Brown said the data center life treated him well so far.

“I was fortunate enough to get into some different companies in times when they were doing a lot of work and a lot of changes,” Brown said. “So, it allowed me to get thirty years of experience in about ten or fifteen years. And I’ve enjoyed working in the industry, and I look forward to many more years to come.”

And with Brown’s passion for data centers limitless, he knew he eventually wanted a role where he could help other industries increase their data center capacity and knowledge. Brown’s journey led to the Uptime Institute.

“Once again, most opportunities are those are surprises rather than things that are planned,” Brown said. After a stint working for Saber Company and a few other related mechanical engineering data center opportunities, a friend from his past called him up to join the Uptime Institute to help them with some engineering challenges. Over the past twelve years, Brown worked his way from consultant to CTO.

“When I started at Uptime Institute, there were four people delivering the technical work, and they were all US-based,” Brown said. “Today, we have thirty-four engineers scattered across thirteen different countries and still growing. It’s definitely changed a lot. But the data center industry’s changed a lot. When I first started (in the industry), chilled water plants were the norm because the electrical power that was required to run a chill water plant was about 25% of what it would be with direct expansion.” Technological advancements in direct expansion today make that method much more affordable.

MarketScale is committed to covering the stories and trends that impact B2B industries. In this month in review, we take a look back at a few of the stories that had an impact in Software & Technology and Read more 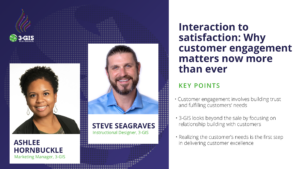 Interaction to Satisfaction: Why customer engagement matters now more than ever

Finding key engagements to develop and strengthen the relationship with your customers is vital to building a successful and reputable business. Host of Fiberside Chat, Tyler Kern, welcomed guests Ashlee Read more