What Your Car Can Tell You About The Future

No doubt about it—IoT is hot. Technology is getting smarter, from our phones to our refrigerators and from our hotel rooms to our medical devices. Recently, Business Insider predicted that 82 percent of the 94 million cars that will become available for purchase in 2021 will be connected cars. That’s roughly 77 million new smart vehicles that could be on the road in the next five years, with a predicted 381 million total connected cars traveling the streets.

With the average American spending more than 17,000 minutes on the road each year, the repercussions of this automobile evolution are revolutionary. Consumer reactions to these developments are mixed, with some embracing the future, and others preferring the comfort of the past.

But before we can predict the future, we need to understand history. The car as we know it today is not the invention of a single individual but is instead the result of an estimated 100,000 patents toward car configuration, all responsible in-part for the development of the modern automobile. Over time, car design has been significantly altered, including the addition of cruise control and electric windows in the 1940s, the earliest air bag prototypes of the 1950s that were perfected in the 1980s, and innovative fuel injection systems in the 1960s. Then the “true precursors” of modern connected cars showed up with dashboard computer diagnostics in 1994 and GPS navigation systems in 1995. The USB ports and Bluetooth connectivity of the 2000s laid the bricks in the road for today’s computerized explosion in the industry.3

Current diagnostics are already an example—with connected ways to check oil and tire pressure, fuel use, and other performance indicators. Other more innovative options are voice controlled activities that allow for safer hands-free interactions with devices. Other safety features include functions such as real time software updates that recall information for vehicles.

BMW announced in September that it has created its own in-car assistant, handling various in-car inquiries, such as navigation, contact searches, climate control, and entertainment scrolling. The bottom line, however, seems to be integrative ability between commands, and that requirement will likely not change anytime soon.

Forbes predicts that auto manufacturing will be one of the five most disrupted industries in terms of IoT in 2019. As for the near future, the self-driving car seems to be the most cogent topic of conversation. This wave of innovation has already begun, with features such as autopilot options that analyze road situations in traffic jams and remote valet assistance summoning. Blind spot technology is also aiding in lane changes in this early phase of evolution. The next step in development includes a scenario in which a driver in the car programs directions and lets the car do the rest. Most exciting (and controversial) however, is the driverless vehicle set to hit the market sometime after 2020.1

No matter which camp you belong in—enthusiast or skeptic—change is on the horizon, and IoT is revolutionizing the way we interact within our vehicles and with our fellow travelers on the road. 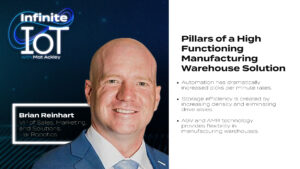