While the cooling (and heating) business is quite a niche area, a Portuguese-based company has found success in the field thanks to its relationship with Portacool — a Texas-based portable cooling manufacturer. In the latest episode of the podcast “Keep Kuul with Portacool,” host Tyler Kern interviewed Nuno Couceiro, the CEO of Ameno — a Portugal-based distributor of cooling and heating solutions, about the company’s connection to Portacool, the clientele base, and need for cooling solutions in today’s world.

Couceiro said that Ameno started in 2005 and was initially a company that primarily rented air conditioners. Then in 2009, a new business opportunity presented itself in the form of becoming a Portacool dealer when they discovered the company’s products at a trade show in Madrid. A new target market was identified. Ameno quickly converted from only renting air conditioners to renting and selling portable coolers to their clients.

By 2014, the relationship between the two companies developed after Couceiro and his team visited a stateside tradeshow and decided to work with Portacool. This decision led to the company venturing in a new direction, said Couceiro.

“We shut down renting operations of air conditioning and focused more on cooling alternatives, and we’ve grown our relationship with Portacool since then. Now we are one of the biggest dealers of Portacool in Europe, and Portacool is one of our biggest products,” he stated.

Indeed, Ameno is one of the biggest and oldest international dealers of Portacool products in Europe. The connection between the two companies has grown and strengthened due to Portacool’s exceptional customer service, readily available correspondence, product longevity, and repairing process, according to Couceiro.

Providing cooling solutions in a niche market means Ameno has a lengthy list of devoted clients. He stated that his company had been provided the opportunity to offer services to various events and clients. One of the most impactful was a Portuguese electronic music festival. He added that Ameno installed cooling solutions for COVID-19 vaccination centers and other facilities.

According to Couceiro, there is almost no industry that won’t require a cooling solution at some point, and his clients come from nearly everyone. But sometimes, clients can show skepticism about the performance of the products. A concern of his was mainly getting clients to see why Portacool is a great problem solver

“Our main challenge is for people to believe the heating problem that they have is easily solvable,” he stated.

Aside from solving these specific issues, Portacool products run on water and low electricity. Portacool is “the world leading manufacturer of portable coolers,” Couceiro said. The durability of the coolers is a driving factor in why Portacool is the best. Couceiro said he has “units with more than ten years in our rental fleet that are in perfect shape.” 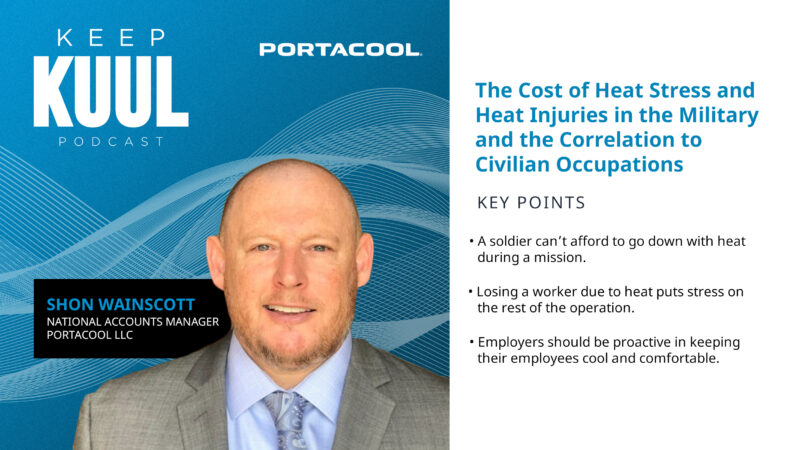 Keep Kuul: The Cost of Heat Stress and Heat Injuries in the Military and the Correlation to Civilian Occupations. 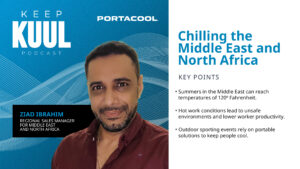 People in the U.S. know Portacool and their line of evaporative coolers, but Portacool is also a chilling force in 56 other countries. Ziad Ibrahim, Regional Sales Manager for Portacool’s Middle East Read more 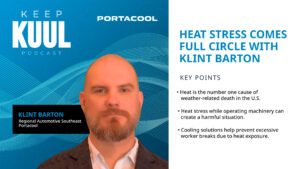 Keeping employees safe, cool, and productive is essential in any work environment. The role heat stress plays was the topic of this episode of Keep Kuul with Portacool. Tyler Kern reached out to Read more