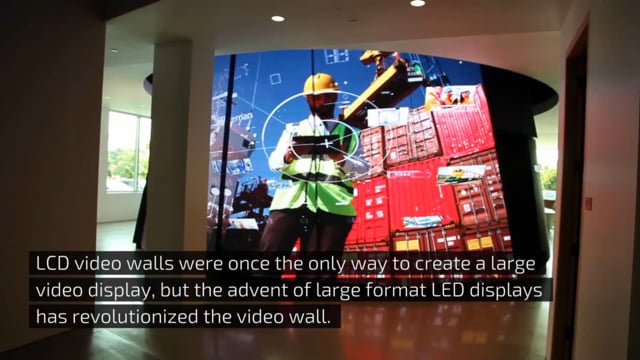 LCD video walls were once the only way to create a large video display. With the advent of large format LED displays, LCD video walls now look like a bunch of TVs in a grid that distract from the content they are intended to promote. On the other hand, LED displays present a seamless digital canvas unrestricted by frames or conventional dimensions.

In addition to the visual benefits, front-serviceable LED walls also facilitate faster and less expensive maintenance activities. Combined with the drop in price of fine pitch LED panels, replacing an LCD video wall with a large LED display is more affordable than ever.

LCD displays have improved in resolution and brightness, but even the introduction of bezel-less panels do not eliminate the obvious breaks in video at the edges of the display. On top of this, complex content management software is required to integrate the LCD panels to display content correctly.

Even with the improvements in LCD technology, the performance of LED displays has blown past that of LCDs and continues to widen the gap. Faster refresh rates, precision color accuracy, improved off-axis viewing, higher contrast, and enhanced brightness control of LED displays have led many to replace outdated LCD displays with LED video walls.

LED video walls also offer the ability to easily customize the size and shape of the display whereas LCDs only offer a fixed 16:9 ratio. To further add to this technological mismatch, LED displays can be built to have a curvature which enables LED video walls to be placed almost anywhere.

As if the incredible display quality and flexibility of design for LED displays was not enough, the total cost of ownership is another strong advantage for LED panels compared to LCD video walls.

To start, the service life of LED video walls is 100,000 hours versus a mere 10,000-30,000 hours for LCD displays. The longevity of LED displays far surpasses that of LCDs and often extends well beyond their design life.

LED video walls also offer the ability to be serviced from the front. This capability directly results in reduced service time and cost to maintain the video wall and make adjustments as required. The reduced time to perform maintenance also means that LED video walls will incur less downtime and minimize disruption to business operations.

The cost of LED displays is also reduced over time. Large outdoor direct-view LED screens have been an inexpensive option for years, but only recently have fine-pitch indoor LED panels become more affordable. This means, regardless of your needs, LED panel pricing is as attractive as it has ever been!

With a clear performance advantage, lower initial cost, and low operating cost, it has never been a better time to replace LCD displays with LED panels. PixelFLEX has a wide range of award-winning LED displays that can be configured into nearly any shape or size to accommodate your needs.