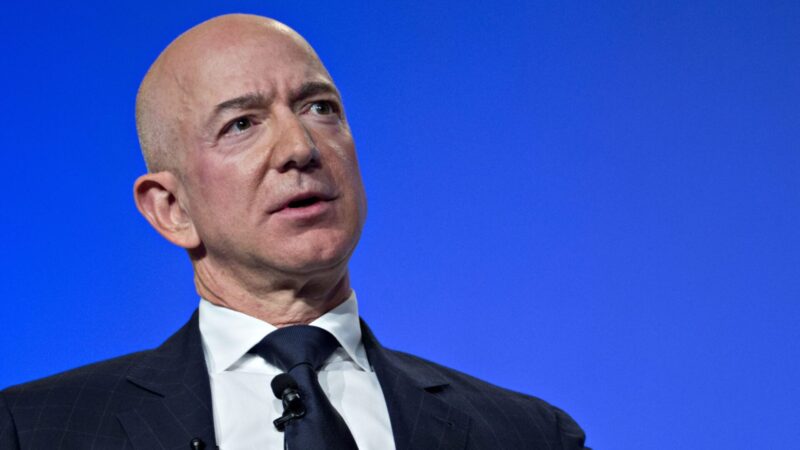 As many businesses struggled to survive the pandemic, Amazon.com Inc. was quietly building a national grocery chain.The first Amazon Fresh store opened to the public in Los Angeles in September. Store No. 11 opened Thursday, and Amazon is working on at least 28 more, from Philadelphia to the Sacramento suburbs. The company is also testing the “Just Walk Out” cashierless shopping technology created for its Go convenience stores at an Amazon Fresh location in Illinois.

More than a decade after it started selling groceries, Amazon has a tiny sliver of the $900 billion U.S. grocery market and has watched traditional chains finally start figuring out how to sell food online. Amazon Fresh, industry watchers say, is a way for the company to become even stickier with devoted Prime members, as well as appeal to a broad cross-section of America—from lower-income shoppers who frequent discounters like Walmart Inc. to wealthier customers looking to pick up online orders.

In a move industry insiders took as a sign of its ambitions, Amazon last year struck a deal with a large grocery distributor called SpartanNash Co. that included the right to acquire a stake in the company.

An Amazon spokesperson confirmed the location of five future stores, but declined to comment on the rest of the locations identified by Bloomberg from planning and permitting documents, state licensing rolls and news reports.

“As with all things at Amazon, we innovate on behalf of our customers across our grocery businesses”

“As with all things at Amazon, we innovate on behalf of our customers across our grocery businesses,” Jeff Helbling, vice president of Amazon Fresh, said in an emailed statement. “We know customers care about low prices, convenience, and great selection in their grocer, and we believe we offer that as well as a seamless online to in-store grocery shopping experience.”

Amazon Fresh has the polished concrete floors and industrial vibe of an upscale grocer. It has technological flourishes, including digital price tags and smart “Dash” shopping carts that tally up smaller purchases as customers browse the aisles.

But this is very much a mainstream grocery store, with a product assortment that falls somewhere between small specialists like Trader Joe’s and larger supermarkets.

The prices, at least so far, are low. A basket of 30 commonly purchased grocery items in one of Amazon’s Chicago-area stores last month undercut Jewel-Osco, an Albertsons Cos. Inc.-owned mainline grocer, by as much as 20% when including items on sale, and is competitive with Aldi and Walmart.

Grocery analysts say Amazon Fresh stores are likely cheap to launch and even cheaper to run—the perfect weapon to stake a long-term claim in a famously low-margin industry.

“In order for them to have a chance of growing market share in grocery, they had to cover their flank” among price-conscious shoppers, says David Bishop, a partner with Brick Meets Click, a grocery consultancy that conducted the pricing analysis for Bloomberg. “The store tends to be more functional, as opposed to inspirational.”

When the industry learned of Amazon Fresh from news reports in 2019, some wondered why the company needed another supermarket chain. Whole Foods Market, acquired in 2017 for $13.7 billion, was supposed to jumpstart Amazon’s grocery effort. But the acquisition hasn’t been as transformative as some initially expected. Though Whole Foods cut prices and added online ordering, the upscale chain has struggled to re-invent itself as a mainstream destination, and store sales stagnated—even during a recent boom in home-cooked meals.

At the same time, Amazon’s entry into the grocery market spooked rivals into making a serious bid for shoppers who want to be able to order food online and swing by the store when the mood strikes. Walmart and Target Corp. rushed to add in-store pickup and local delivery options that Amazon couldn’t easily match with its much smaller portfolio of Whole Foods stores.

Enter Amazon Fresh, which includes a dedicated staging area for order pickup and returns. Nearby is an ample prepared foods section, a bid to entice online shoppers to stick around and grab some high-margin snacks, dinner or a bottle of wine.

Amazon is known to experiment with shopping formats, only to quietly fold projects that aren’t working or have yet to fulfill their purpose, including dozens of pop-up electronics stores in malls. If Fresh’s leadership is any guide, this does not seem to be one of those. The division is led by Helbling, a former technical advisor to Chief Executive Officer Jeff Bezos. Graduates of that chief-of-staff-like role often have the pick of high-profile jobs. Helbling works with two other Bezos understudies: Wei Gao, who oversees online groceries, and Dilip Kumar, who developed the Go stores and whose teams built the Dash smart carts. 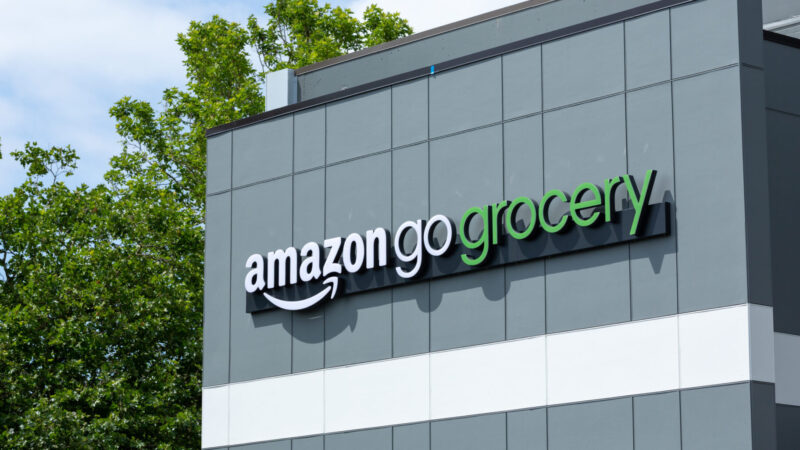 Analysts have long expected Amazon to bring its cashierless technology to larger stores. The company currently operates two Go Grocery locations, the largest of which is about 13,000 square feet—or roughly six times the size of the original convenience stores. Fresh stores are substantially larger, ranging from from 25,000 square feet to 45,000 square feet.

The bigger the store, the harder it is to get the cashierless gear to work, but Amazon says the latest version of its “Just Walk Out” technology can be scaled up. The company isn’t offering cashierless checkout at the Fresh store in Naperville, Illinois, but a spokesperson says it’s testing the technology for possible use down the road.

“Go is kind of nichey—a cool experience, but more experimental than anything,” says a former senior employee involved with Amazon’s grocery efforts, who requested anonymity for fear of violating confidentiality agreements. “Fresh stores are more of an all-in strategy for Amazon. A very strategic, long-term play.”

As always at Amazon, data played an outsize role in Fresh’s development. Employees analyzed the density of Prime members per zip code to help determine where to put stores, according to a person involved in the planning. The first 11 locations are mostly speckled in suburban, upper-middle-class areas. Many of the sites were vacant retail storefronts, including several former Toys “R” Us locations, and a smattering of shuttered grocery stores. Such repurposed real estate can dramatically lower a store’s breakeven point.

Amazon used detailed analyses of shopping habits to help sketch out a list of 15,000 products to fill the store shelves, an assortment that meets most shoppers’ daily needs, but stops short of larger-format groceries. That means several varieties of tomato soup, not dozens. Private-label bands, including the Whole Foods 365 line, are prominent; there’s also an extensive alcohol section.

Less characteristically, Amazon also looked outside for expertise and perspective. Amazon Fresh’s ranks include veterans of German discounter Lidl, Starbucks Corp., Walmart and packaged goods makers. Amazon also tapped Whole Foods for advice, outreach that some people on the receiving end viewed as an admission that the company was venturing outside its comfort zone.

With at least 39 stores in the works, Fresh seems poised to surpass Kumar’s Go and 4-star stores, which sell a potpourri of bestselling items, as the focus of Amazon’s physical retail expansion. The company’s hunt for potential grocery store sites has commercial real estate brokers salivating. “I would look at every vacant box, 10,000 to 30,000 square feet, and say they’ve got an eye on it,” says one, who requested anonymity to protect business relationships with Amazon.

Yet the Fresh rollout, in an already well-served grocery market, faces plenty of competition. For example, Aldi is making an aggressive U.S. push and plans to open 100 stores this year. To move the needle at a $1.5 trillion company, Amazon’s new chain will—at minimum—need to exceed Whole Foods’ roughly 500 locations, analysts say.

As a result, some remain skeptical.

“If you would have asked me three years ago, where they would have been today in grocery, I would have expected a much bigger buildout, much more aggressive advancement”

“If you would have asked me three years ago, where they would have been today in grocery, I would have expected a much bigger buildout, much more aggressive advancement,” says Matt Sargent, a consumer trends analyst with consulting firm Sargent Up North.

–With assistance from Noah Buhayar.

To contact the author of this story:
Matt Day in Seattle at mday63@bloomberg.net 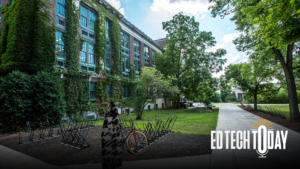 What’s With This EdTech Market?

Never before has edTech been more essential, or more coveted in the investment community. In this of EdTech Today, Liam Pisano, Managing Partner at EduLab Capital Partners, talks about the Read more

Are Digital Tickets Here to Stay as Live Events Return?

The fans remember the highlights but the franchises remember the technology, data, and inventions that powered their season. Host Tyler Kern sits down with the innovators, leaders and founders that are taking sports Read more 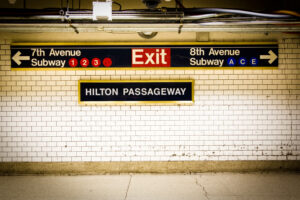 Can New York Innovate Away its Public Transit Woes

With a whopping average of 56 hours a year of delay per commuter, New York recently earned the number one spot for worst traffic congestion in Texas A&M’s Urban Mobility Report. One potential solution in Read more 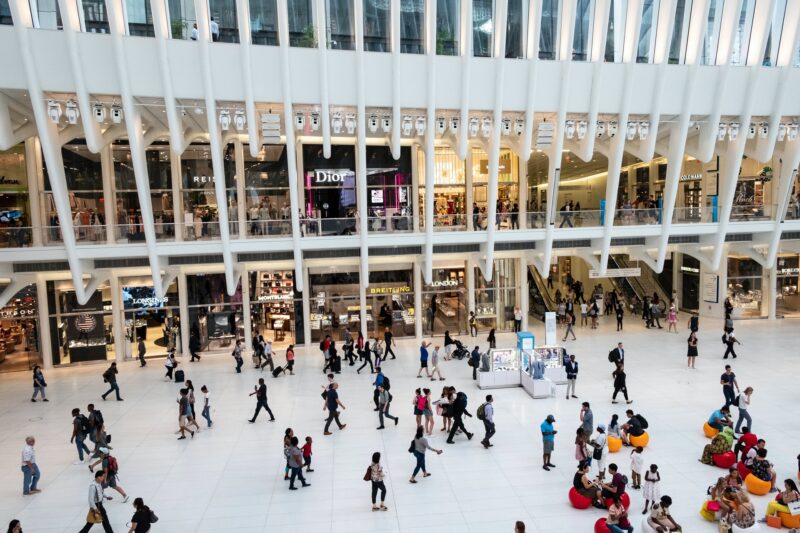 Top Retailers Gathered at Tango’s “Location Is Everything” Summit 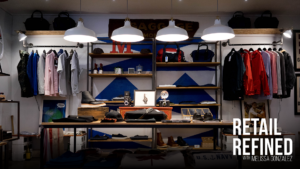 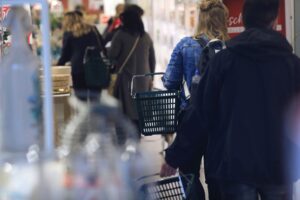 US Retail sales jumped .6% in June over May and 18% over June of last year. Tune in below as Stacey Widlitz, president of SW Retail Advisors, breaks down the June U.S. retail numbers and what they mean for the Read more