Electric Car Battery Bottlenecks Have a Way of Being Worked Out 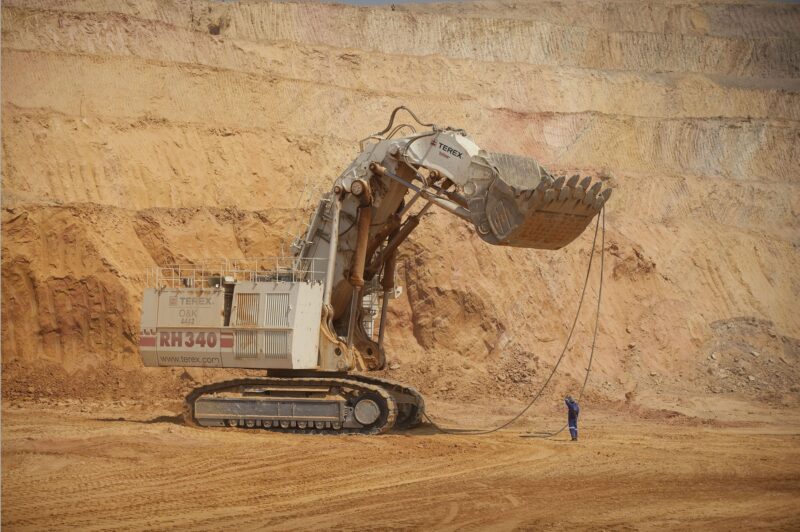 (Bloomberg) — Supply of battery materials was a key part of the recently passed climate bill in the US, as the country looks to bring online more domestic refining and manufacturing in the coming decade.

The electric-vehicle battery news cycle feels especially frenetic right now, with some groups predicting a decade of shortages for materials like lithium. There were similar statements made about the availability of cobalt a few years ago. But amid all the excitement about battery metal demand, prices for cobalt have plunged 40% from their highs earlier this year. 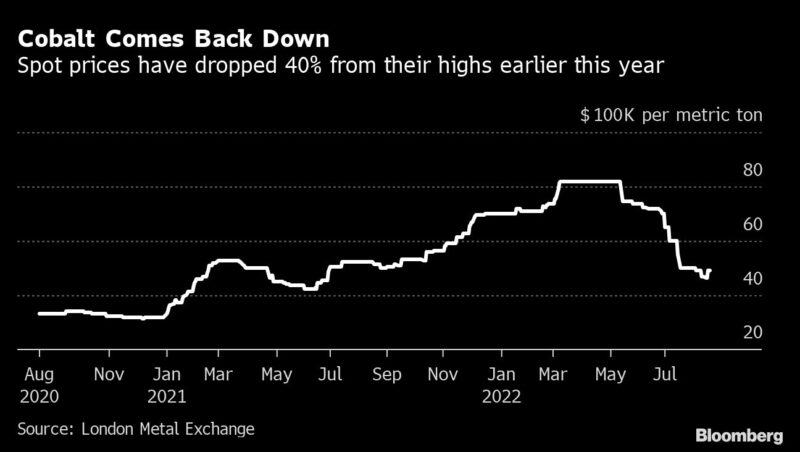 Much of this has been supply-driven. Glencore ramped up output at its Mutanda mine in the Democratic Republic of Congo in the first half, leading to a 40% increase in its cobalt production compared to the same period last year. Glencore accounted for about 19% of annual cobalt production in 2021. With Mutanda fully back online, Glencore’s market share could rise to around 26% this year, so what it does moves the market.

Everyone understands that when prices are high, miners are motivated to dig more out of the ground. But there’s also been a less-appreciated trend on the demand side, where battery manufacturers and automakers are quietly engineering cobalt out of the equation.

Back in 2018, lithium-ion battery chemistries with cobalt in the cathode had a very dominant position in the market, accounting for 86% of all batteries that went into vehicles that year. By 2020, that had fallen to 83%. This year, BloombergNEF is expecting it to fall much further to 60%. 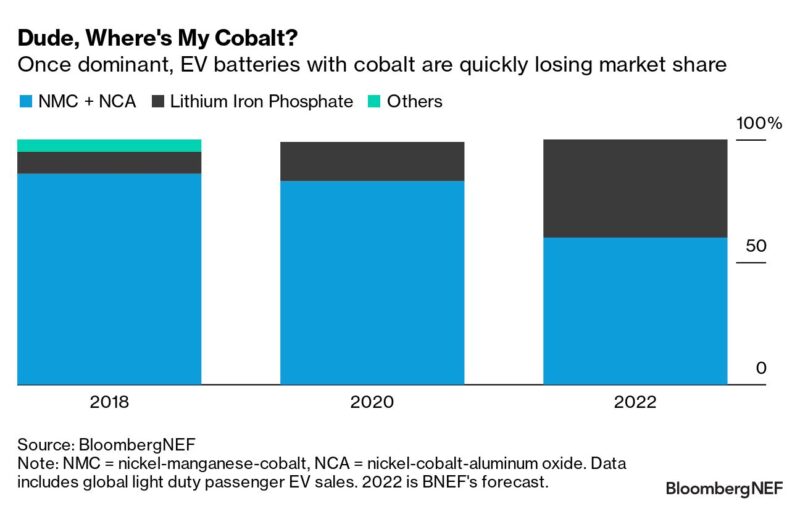 Lithium-iron phosphate (LFP) batteries, which contain no cobalt, have taken up the balance due to their lower cost and high stability. This has mostly been a China phenomenon, as domestic champions BYD and CATL have long been pioneers in the technology. Tesla also uses LFP batteries for the standard range Model 3 and Model Y vehicles it produces in China, which are exported globally. Almost half of all of the vehicles Tesla produced in the first quarter used LFP.

Most other Western automakers have so far stuck with nickel manganese cobalt (NMC) batteries due to their higher energy density. But Volkswagen announced in March that its entry-level models would include LFP batteries starting next year, while Ford revealed last month it will add an LFP option for the Mustang Mach-E and F-150 Lightning in 2023 and 2024, respectively. Both these automakers likely see LFP batteries as a way to keep costs under control and diversify supply. Hyundai is also reportedly working on integrating LFP batteries.

According to Chinese media reports, CATL is nearing commercialization of another variant of LFP with added manganese in the cathode for additional density. BNEF expects this latest variation — called LMFP, with the M standing for manganese — to account for about 6% of batteries going into EVs in 2023, and we expect more automakers to announce plans to use LFP and LMFP batteries in the next few years.

Even within the nickel-manganese-cobalt battery family, there’s been a steady progression away from cobalt. The early NMC formulations contained equal parts nickel, manganese and cobalt, called NMC-111 to denote equal shares in the cathode. Those were quickly supplanted by NMC-532 and NMC 622, which in turn has been overtaken by NMC 811, and the latest formulations of NMC batteries have even smaller amounts of cobalt.

For now, the effect of lowering cobalt use is still being outrun by more EVs being sold and larger batteries going into long-range EVs. So while the EV industry still has less-intensive cobalt use per EV, total demand for cobalt going into EV batteries is still rising in absolute terms. But growth is slowing and this has led to some dramatic downward revisions in expected demand. BNEF’s own estimates for cobalt demand from batteries have fallen more than 50% over the last four years. 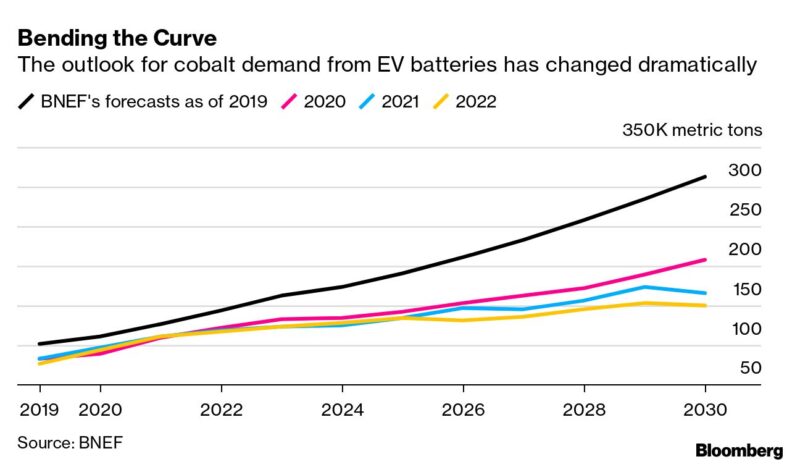 None of this should be surprising — it highlights the ways markets work and always have. High prices help bring on new supply, and drive more substitution on the demand side. Whenever there’s a boom in a particular material, there are always groups claiming this time things are fundamentally different, that this time the supply curve really is inelastic, or that this time there are no substitutes. Those claims usually get proven wrong by the combined effect of price signals and ingenuity.

Huge investments are still needed in all areas of the battery supply chain to keep pace with growing EV demand. BNEF estimates that demand for nickel in batteries will rise by 286% from now to 2030, while lithium will see a six-fold increase. This will require tens of billions of dollars in targeted investment, particularly on mid-stream refining supply, which is the mostly likely near-term bottleneck. But don’t ignore the way the demand side can change too. Human ingenuity is a powerful force, and there will be some more surprises like cobalt in the years ahead.