MarketScale Energy 12/05/18: From Batteries to Basins

Today’s MarketScale Energy Podcast Show hosts two varied features; one looking at the future of a familiar power source and its impact on local communities, and the other looking at the energy behind drones. We hear from Founder of BP Capital & TriLine Index Solutions Toby Loftin, who analyzes an article on MarketScale Energy that digs into the impact of increased production in the Permian Basin, and how one stretch of land is impacting not only Texas and New Mexico communities, but the global oil market.

We also get a drone-themed recap compilation of several MarketScale guests who we’ve sourced over the last year, looking at innovation in drone technology. Specifically, what’s the best way to power them? Some say hydrogen fuel cells, others say battery power. We give them the platform to voice their opinions and insights, and show why thoughtful changes in drone power sources means more capable payloads.

POWERING THE PAYLOADS OF TODAY

If there’s one emerging technology that consistently grabs my attention and never seems to slow down with potential applications and upgrades, it’s the drone. The most recent innovation came from MIT; engineers ran test flights on a new drone concept that’s powered on ionic wind, meaning silent flight and lighter machines. The first few test runs took place in a gymnasium, but perhaps soon we could see this technology in our skies, one step closer to the humming silent flight of our favorite sci-fi ships.

On MarketScale, we’ve had several guests explore the future of drone use. We even got to see it for ourselves, first-hand, when we went to InterDrone 2018 in Las Vegas. We’ve looked at upgrades in agricultural sensors, zero-delay video, geo-mapping, and more.

For the first feature on today’s Energy Podcast, we wanted to give you a little look back at some of our favorite drone content over the last year, and what other innovations are elevating drones from toy to tool.

While at InterDrone, we got in the trenches and interviewed several innovators. Staying on the topic of energy, a big talking point at InterDrone was: How do we perfect what powers drones? Are batteries really the most efficient way to get drones airborne? Adam Schlender, Senior Associate with Doosan Mobility, gave us his insight on why hydrogen fuel cells could be a better answer.

Adam wasn’t the only one with an opinion on more efficient drone power. Another proponent of hydrogen fuel cell technology was Julian Hughes, senior vice president of Intelligent Energy. Fuel cell technology looks to be the solution for commercial drones, but Hughes thinks a better answer lies in multiple power sources, or hybridized energy.

We’ve explored other aspects in drone technology beyond just energy on MarketScale. Another big one is Wi-Fi connectivity. Dropping a connection while checking Instagram is not exactly a catastrophe. Losing connection to a drone flying over a disaster area is another story.

Professor Joseph Camp Ph.D., Associate Professor of Electrical Engineering at the Lyle School of Engineering at Southern Methodist University gave us a look at SMU’s funding for three-dimensional connectivity for drones, and why it’s so crucial.

Innovation in drone technology is always exciting. Perhaps more exciting is seeing these drones in action. Recently, catastrophic weather events, like 2018’s devastating hurricanes and the California wildfires have put drones on the front lines, surveying damage and doing search and rescue operations.

Jonathan Ramirez, an account representative from Hangar, came on our podcast to explain how Hangar’s drones helped save the day in Mendocino County, California.

LOCAL AND GLOBAL IMPACTS OF THE PERMIAN BASIN’S OIL BOOM

Our second feature today is a deeper dive into an article Watts on MarketScale Energy, exploring the oil boom of the Permian Basin. The 250-by-300-mile wide area in Texas and New Mexico has, over the last decade, become an ever-growing part of the world’s oil production. Right now, it accounts for 30 percent of global oil; by 2025, that could be closer to 50 percent. How is this one segment impacting the global oil trade? Even more close to home, how is this influx affecting local communities in the Basin?

Toby Loftin, Founder of BP Capital & TriLine Index Solutions  gave his insight in Watts’ article, and rejoined us on the podcast to dig even deeper into the history and future of the Permian Basin. An increase in oil production means changes for locals, new and old.

“You can get a pretty good idea of the level of activity in the local area by the spot price of the hotel rooms,” Loftin said.

The housing market is skyrocketing as eager professionals flood the area looking for work, and people in the area are having to rapidly adjust to keep up. Loftin explains how the oil industry is maneuvering the economic pressure placed on both the Permian Basin and its surrounding Texas and New Mexico cities.

“We have been exporting over two million barrels per day out of the US to other parts of the globe over the last 12 months; the infrastructure that’s needed to do that is crucial,” Loftin said. 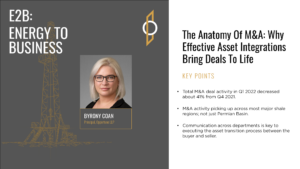