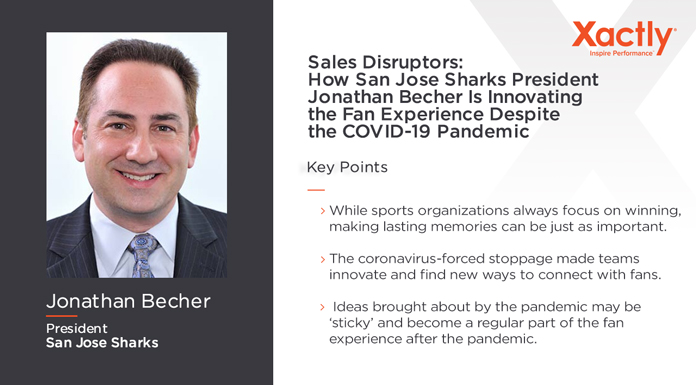 It’s not a tactic to avoid getting recognized at Starbucks. For Becher, it’s just the truth. His true title is President of Sharks Sports and Entertainment, with his purview extending past the National Hockey League team to the minor league franchise, facilities, a non-profit and other wings of the business.

Still, men skating and using sticks in an attempt to get a rubber disk past a man with a glove drives most of their business. So, when the actual hockey stops, as it has during the coronavirus pandemic, what do you do to keep fans connected? If you’re Becher, you adapt.

Of course, that can be watching Evander Kane light the lamp in the third period, but Becher and his team are thinking of different ways for fans to make memories. It’s meant diving in to areas the team previously eschewed, like simulated games using a video game platform.

The team has given some fans the opportunity to create an avatar and “suit up” next to their favorite Sharks players during the games the team puts out on its Twitch channel.

“They’ve been surprisingly, to me anyway, because I’m not a gamer, popular,” Becher said. “Partly, I think it’s because we did some cool stuff.”

One fan, after his digital alter ego scored the winning goal, posted on social that it was the best experience of his life. Another memory made thanks to the Sharks – without the team even taking to the physical ice. Those moments are just one of the innovations Becher believes will be “sticky” and carry over once the team is able to play games again.

“Here’s a new line of business that didn’t occur to us before, that was born out of necessity because of this disruption, and which we will continue even long after live games are back, because not everyone can be in our building in one night,” he said.

Xactly is proud to live on the leading edge of sales performance management, and our podcasts give us a way to share that insight with you directly. For more thought-leading episodes of Sales Disruptors by Xactly, check us out on Apple Podcasts and Spotify.

The Valve Chronicles: Pressure Control Guideline Differences in Aircraft Fueling Operations Between the US & Europe, Part 2

On this episode of The Valve Chronicles’ look at the differences in aircraft fueling operations between the US and Europe, Cla-Val’s Tom Boriack, Global Market Manager for Fueling, and Richard Hooton, Market Read more

The era of 5G networks is upon us, but what does that really mean for the average consumer? What can people expect from the implementation of this new technology, and how will it impact our day-to-day Read more