This article is the first in a series of profiles on architects and designers who are challenging the status quo and tackling problems worth sharing.

Sometimes the best partnerships are born from solving real-life problems. That’s how co-founders of KEM Studio Jonathon Kemnitzer and Brad Satterwhite started working together almost two decades ago. Fast forward 14 years and the duo lead a dynamic firm that fuses multiple disciplines to deliver one-of-a-kind designs and experiences for their clients.

“The architecture firm I worked for was stuck on a particularly difficult project and someone suggested we bring in an Industrial Designer,” Satterwhite recalls. Something he realized early in his friendship with Kemnitzer is that he (and most industrial designers) saw the world a bit differently. “From the moment Jonathon started working on the project, he taught us to view the problem from a different angle. He was able to put himself inside of a space that did not yet exist and debate how people would use each element of the space. It was a light bulb moment for me to realize we could benefit from each other’s strengths and disciplines.”

That first meeting was in 2001. A few short years later, the duo started their own firm with the purpose of blending the disciplines of architecture (Satterwhite is a licensed architect) and industrial design (Kemnitzer is a licensed industrial designer). The chance encounter has grown into a thriving firm that has won national design awards and worked with celebrities and on some awe-inspiring projects.

“I always wanted to work on a broad range of design projects,” Kemnitzer said. “But if you told 22-year-old me that I would get to design luxury speakers for Martin Logan, reimagine an iconic product for Airstream (that one is still top secret), invent a new type of playground for an elementary school, or design a skate bench that Tony Hawk fell in love with, I think I would be ecstatic about where my career took me.”

SIDEBAR: From Kickstarter to the King of Kick Flips

The KEM Studio team was experimenting with a relatively new technique (CNC tube bending) in 2010 when they designed “Skate Bench #1.” The simple idea was to re-purpose skateboards as usable benches. The development coincided with the rise of popular crowdfunding site, Kickstarter. The project reached its funding goal, but also caught the attention of national media and eventually, legendary skateboarder Tony Hawk.

Hawk and the KEM Studio team collaborated on a number of custom Skate Benches that were auctioned off for charity. That small and simple product design remains a part of their story. In fact, each residential architecture client of KEM Studio receives their own skate bench at the completion of their project – it has become a “KEM signature” that pays homage to their past.

But the architecture side of the business is no slouch either – having worked on award winning residential projects (like the Madison Residence or 1915 Main) and corporate developments. In fact, the building they inhabit in the old stockyards district of Kansas City was designed by their team.

“We love living in a place like Kansas City,” Kemnitzer said. “It is a big, little city. Small enough for us to make an impact and put our fingerprint on, but large enough to have the culture and talent pool that challenges us to grow.”

Satterwhite and Kemnitzer aren’t alone in their feelings, Kansas City is renowned as one of the best cities in the Midwest to be a creative professional. The confluence of art, culture, music, and great food make its inhabitants fiercely loyal and proud of their city.

In the early days, the pair was determined to create a different kind of firm. They had lofty aspirations that they did not need traditional roles, titles, or responsibilities. There was no one assigned to accounting, no one person responsible for business development. On paper, it was idyllic – everyone would share the load. But they learned the hard way that without definition, too much was falling through the cracks.

“It was certainly a failure in our early days,” Kemnitzer said. “But like most failures, we learned from it. The struggle of things falling through the cracks or stepping on each other’s toes allowed us to appreciate the structure of a business. It helped us figure out which of us was great at what role and where we needed to bolster the team.”

This forced them to determine who was great and which parts of running a business. They quickly noticed the business ran more smoothly and they did not lose their sense of independence or flexibility.

View on the Future

There is a spirit of optimism when you visit their HQ in Kansas City. KEM Studio has young architects and designers from around the world apply to work on their team. But they are looking for a specific breed when they add a new team member.

“You have to be willing to do the hard work,” Kemnitzer said. “We are in the old Stockyards District of Kansas City. This is where people rolled up their sleeves and built business they were proud of. And that is a huge part of our approach.” And that isn’t just lip service – the team builds dozens of prototypes of every project by hand. They have worked hard to create a nimble laboratory that allows for rapid prototyping, and they argue that you cannot know if a product or space is going to work until you have lived with it.

Technology plays an interesting role in the conversation. The team can accomplish exponentially more work with the digital tools at their disposal today, but they force themselves to remember that tactile matters. “Some things just cannot be replaced,” Kemnitzer said. “Building and iterating will always be a part of our process, and there are some processes we intentionally focus on that do not incorporate technology.”

Advice to Young Architects and Designers

Both founders are tied into mentoring and serving on various boards and governing bodies for architecture and design in the Midwest. So, when the conversation turned to advice for the next generation, it was a familiar topic for the two.

“My biggest advice is for young architects and designers is that great ideas matter, but we should focus less on who they come from,” Satterwhite explained. He pointed at that so often young professionals are trying to make a name for themselves and work as hard to get credit for the idea as they do formulating the idea itself. “If they trust that great ideas are currency and they can bring them to the table, the rest takes care of itself” he said.

The democratization of ideas and problem solving is part of the secret sauce for KEM Studio. With award winning projects in their rear-view mirror and a dozen projects that are “under the microscope” in their laboratory, the best is yet to come for this team. 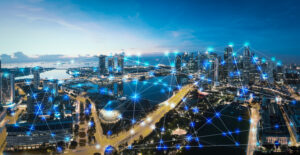 How Can Smart City Open Standards Be Achieved?

The MITRE Smart City Summit featured a major stance from Michael Dunaway, program lead for Global Communities Technology Challenge program at the National Institute of Standards and Technology (NIST). The stance: the importance of smart city open standards. Some of his points included opportunity for future growth of digital technologies to improve city infrastructure, prevent […]