On the second episode of Straight Outta Crumpton, Greg Crumpton, people promoter, dot connector, technology enthusiast, Kaizen Practitioner and VP of Critical Facilities and Technology at Service Logic, is joined by David Jones, Co-Founder of Flexential—a hybrid IT solutions provider built on a people-first approach. In this podcast, these two titans of industry discuss the cornerstone of their business mentality—relationship-building—and how the bonds forged throughout their careers have aided in their success.

A friend and business associate of Crumpton’s for more than 20 years, Jones explains that after a tour in Vietnam, his career in technology—which he amiably mentions has been strewn with both successes and failures along the way—began in the telephone industry some 40 years ago. After the breakup of the Bell system, he helped to grow a long distance entrepreneurial company which was later sold to MCI. From there, Jones helped startup and run several local telephone companies, built a fiber network from Atlanta to Columbus, GA, and eventually began working as a consultant, primarily in the southeast, “helping companies get into this thing called the internet” during the late 1990s.

“I began to get the idea—because I was helping little ISPs collocate,” Jones says, “that you could have a facility and they would have to provide entrance facilities for you to connect into the network. And I began looking, thinking, ‘Hmm, this could work. This thing called data centers that I’m beginning to see come, that’s nothing but a central office basically.’ And a friend of mine—who’s still a very close friend named Nick Kottyan—showed up one day at my office and he said I’ve got an idea, and it turned out I had the same idea. So, we wrote a business plan and that business plan is ultimately what birthed Peak 10.”

The two took their plan to an attorney who advised them that the business was going to be capital-intensive and that they should come back to him when they had between $1 and $2 million in financing. Within six weeks, the pair returned to the attorney with $1.5 million in hand. Astounded, the attorney asked how they had accomplished it.

“Well, I haven’t burned a lot of bridges and I’ve made a lot of friends along the way, and those friends believed in me. And they know that the money they’re willing to put up—they have to be able to put a check in the trashcan if it doesn’t work.” Jones said. “That’s how we got started.”

Backed by an additional $18 million from some private equity firms, and with Jones and Kottyan eventually at the helm, Peak 10 truly came into its own, selling two different times—once in 2010 for $400 million, and again in 2014 for $730 million.

When people ask what the key was to Peak 10’s success, Jones replies, “Look, I’m not the smartest guy in the world. I have a BA in Economics from the University of Virginia—I’m not an engineer. But what I figured out was how to have about twelve really smart people play well in the sandbox together, and how to make that team have the same beliefs and have the same trust in themselves and the people we work with.”

“Trust is my gold standard,” Crumpton agrees. “It was just really cool to hear that journey and how many of those moments involved people—from that initial $1.5 million raised with the friends and family around, and then being able to go out and raise $18 million locally—that’s just…that speaks to you and it speaks to the relationships.”

Tune in to the podcast to hear more about the importance of relationships, the responsibility that goes with a title, the value of talented, decisive team players, the art of listening intently, and more. And stay tuned for more episodes of Straight Outta Crumpton coming soon.

The Leadership Lessons to Learn from the World of Ballroom Dancing 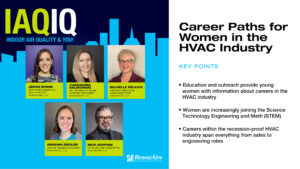 When it comes to the science, technology, engineering, and mathematics (STEM) workforce, women continue to be underrepresented. Many industries that rely on a foundation of STEM education are dominated by a Read more