by Abi Wolf on Sep 16, 2022
advertisingcableNetflixNielsenstreaming

Streaming viewership has officially surpassed cable TV viewership for the first time in history, according to Nielsen’s most recent report. Platforms including Netflix, YouTube, and Hulu contributed to streaming capturing the largest share of viewership, 34.8%, in July 2022, taking a stake from the other major sectors of broadcast, cable TV, and unmeasured tuning and VOD.

Month-over-month growth of streaming was minimal, only around a 1.1% share point change. Looking at 12-month change is where viewers’ trend towards streaming is most clear. A year ago, cable TV owned a whopping 37.7% of TV viewership, the resounding plurality over streaming which captured 28.3%. This year cable lost more than 3.0 share points, dropping to 34.4%, while streaming gained 6.5 share points.

“Streaming is taking an increasing share of the cable TV universe for a reason we don’t always talk about,” said Darren Campo, adjunct professor at the NYU Stern School of Business and SVP of programming and content strategy at the Food Network and Cooking Channel. “Cable TV can’t collect user data. If you can’t collect user data, you cannot improve the viewing experience.” 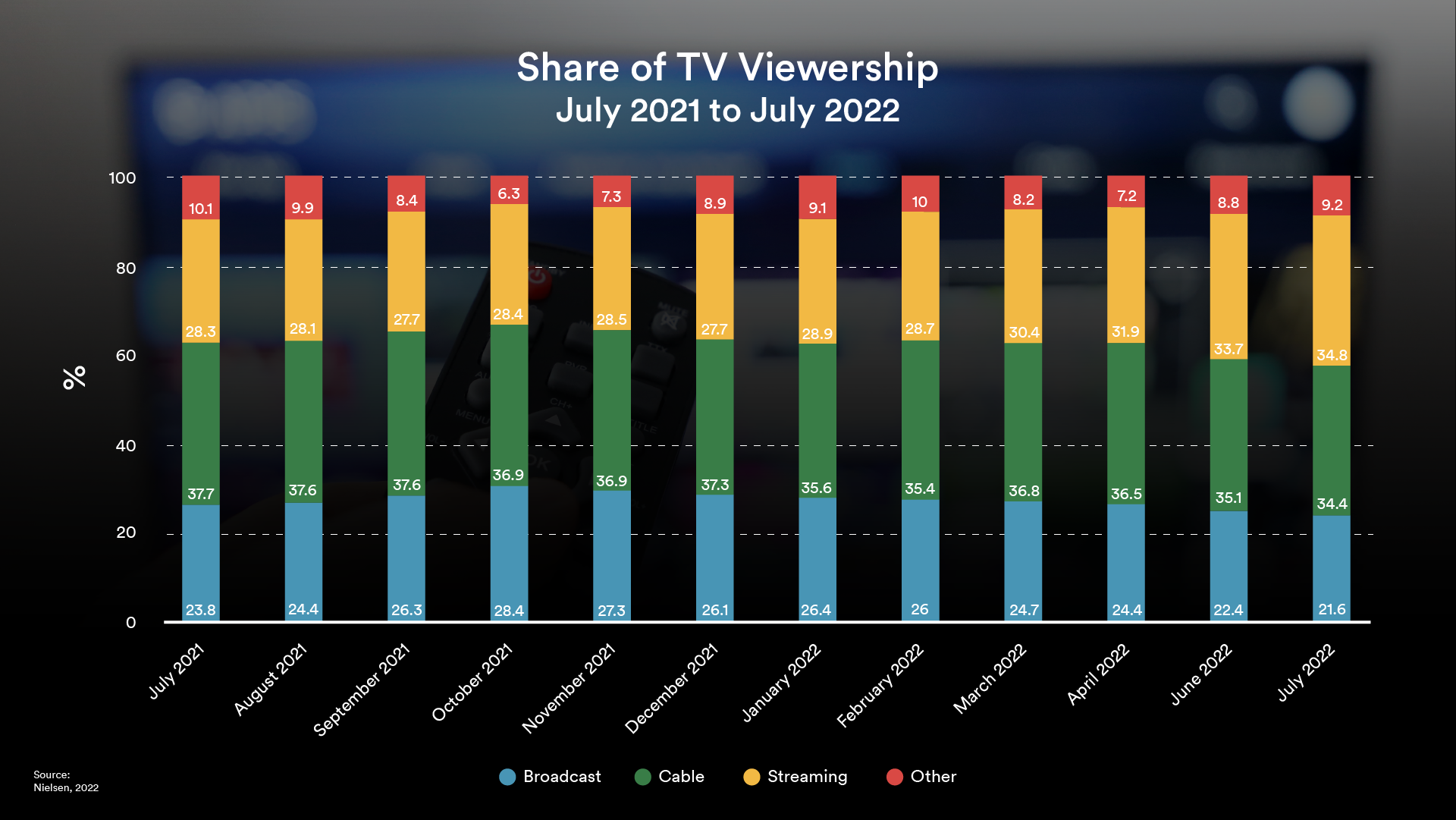 Though there are signs indicating this overtaking is the culmination of a long-term trend, it’s important to factor in some of the seasonal factors that may have contributed to streaming’s July success.

Broadcast currently sits at a 21.6% share of TV viewership, down 2.2 share points year-over-year and down 3.7% on volume compared with last month. Much of this can be attributed to a loss in sports-related content, with June marking the end of the NHL and NBA playoffs resulting in a 41% drop in broadcast sports viewing. Cable usage also fell victim to the sports viewership decline in July, dropping its sports genre engagement rates by 15.4% month-over-month and 34% year-over-year.

While overall TV viewership numbers continue to remain steady, this new milestone reinforces streaming as a top choice for TV viewers along with cable TVs persistent atrophying. This continues to redefine the value proposition for advertisers who are looking to maximize their engagement and ad spend for the highest ROI. 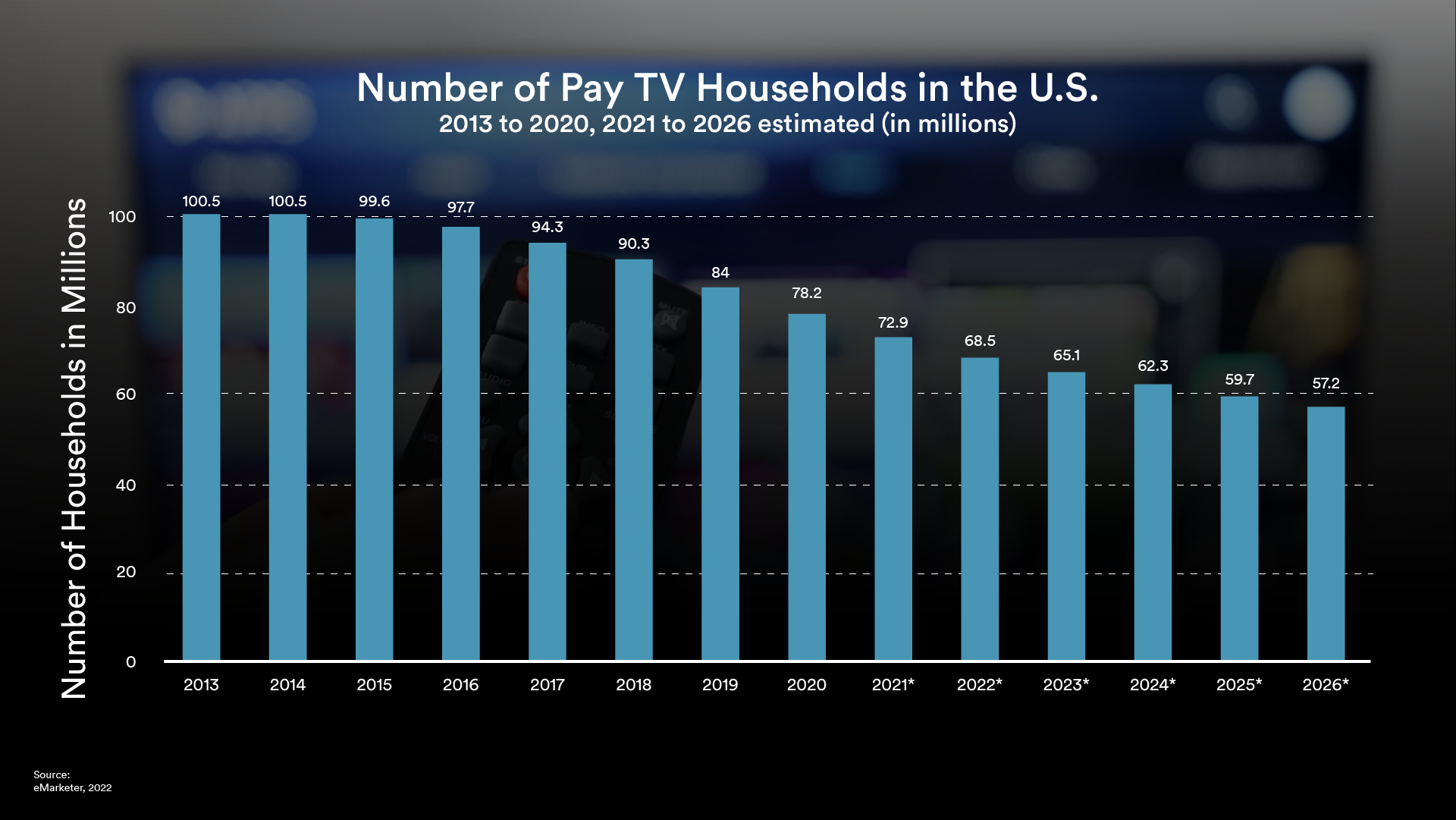 Netflix’s viewership reign alone, which according to Nielsen’s report captured 8% of all TV viewership in July 2022 and has remained the top streamer in viewership percentage for at least the last year, should be motivator enough for advertisers to increasingly seek placement on streaming channels over cable TV ad slots.

“Netflix’s overall share of streaming and television viewing is staggering. Nielsen reported for the 2021 and 2022 season that Netflix had over 1.3 trillion minutes viewed. That’s equal to ABC, NBC, and Fox combined,” Campo said. “That’s like adding a whole other YouTube to the market when you consider advertising is now going to be on Netflix.”

In mid-July Netflix announced it’ll be working with Microsoft to launch an low-cost advertising tier for consumers, a heel turn for the company which previously staked its claim on being ad free and staying that way. The vision is to appeal to a wider demographic and create a “premium, better-than-linear TV brand experience for advertisers” the company said in its press release.

“One thing advertisers want to be associated with besides great content is a great experience, and the experience on streaming is so much better than the experience on linear television, all the ad dollars are eventually going to go there,” Campo said.

Netflix isn’t without its struggles, but it seems that even short-term shaky ground for the company isn’t enough to slow its growth. It revealed in both its Q1 and Q2 2022 reports that the company had a net loss in subscribers, hitting a new low with a net loss of 970,000 subscribers globally in Q2.

Linear TV still holds a few advantages and differentiators, though, and these advantages could level the playing field if cable providers leverage their unique viewing experience intentionally.

“[Linear] television works like a clock, and it matches the rhythm of our daily lives. So, if programmers lean into the clock-like aspect of linear TV, which we see with the success of morning news, evening news, and weekly commentary shows, none of which have worked well on streaming, then there’s still an incredible viewer benefit in linear television,” Campo said.

Streaming taking a large share of U.S. viewership has led many in the industry to wonder, how this will impact advertisers’ value proposition for linear cable as well as streaming. Marketing intelligence experts like Jonathan Silver, founder, president & CEO of Affinity Solutions, sees streaming’s official rise to viewer leadership being a motivator for the whole industry to innovate.

“Streaming does have some inherent advantages technology-wise since it’s built on digital, but cable also has lots of advantages and they can catch up fast, and there are significant customer segments that still get their content from cable. We see this activity as raising the bar, and we believe that both streamers and cable companies will rise to the challenge,” Silver said.

Taking July’s news and turning it into a fundamental shift in business model may be premature; Nielsen’s report shows cable still holds the second-most share of TV viewership and if the share spread persists, it likely will hold that second place spot for months to come.

So have we truly reached a changing of the guard? What is clear, at least, is there are many changes being made in the industry while cable TV viewership is declining. Cable still has strengths, but streaming’s rising prevalence and its niche audience-targeting benefits is pushing all content mediums to emulate the streaming viewing experience. Advertisers, therefore, should keep this pull toward streaming-style content curation and hypertargeting in mind without ditching the still-large cable market.

“We see this shift to streaming as just one opportunity for the entire industry to embed that outcomes-based, optimization-based view. Streaming does have a head start especially because of its building out on digital technology…but cable also does targeting well through set-top boxes. Advertises just need to understand the tactics, the methodologies, so they can make informed decisions,” Silver said. 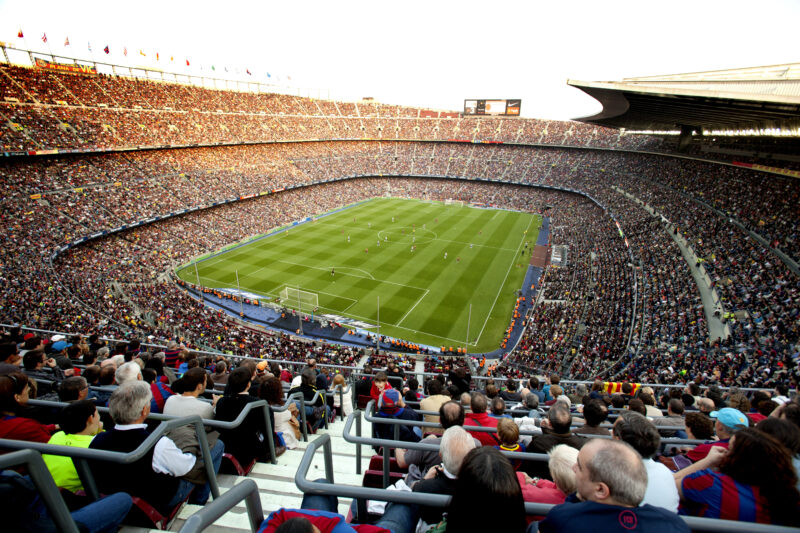 (Bloomberg) -- Peloton Interactive Inc. said it will sell bikes and certain accessories on Amazon.com Inc. in the US, breaking with a longtime practice of exclusively selling products via its own website and Read more 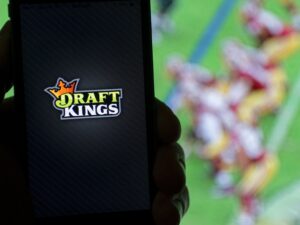 (Bloomberg) -- California has the potential to become, it’s estimated, a multi-billion-dollar sports gambling market, larger than everywhere in the world except the UK. Which is why, with 11 weeks left to the Read more