MarketScale’s Best of 2018: InterDrone in Review 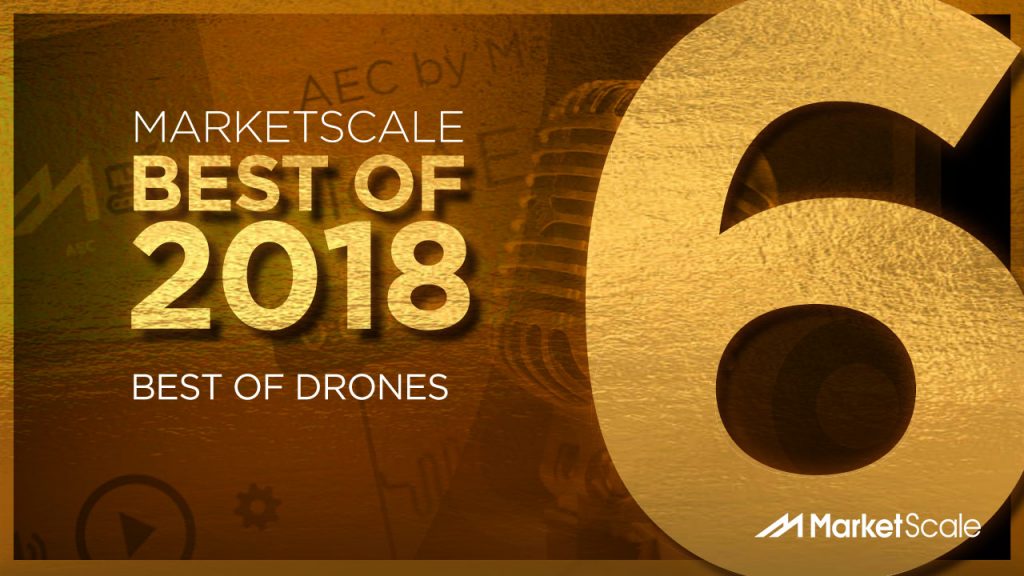 MarketScale is proud to present our favorite stories from 2018. Every day from today through the end of the year, we will release a new story. Be sure to follow our social media accounts to catch up on all of our top stories!

September 5 through 7 proved to be a masterclass in drone technology. I had the pleasure of attending InterDrone 2018 at the Rio in Las Vegas, the largest commercial drone event in North America, where I got insight on some the biggest names in the drone world from DJI to Doosan.

As soon as I stepped onto the trade-show floor, the passion from booth to booth was intoxicating; everything from augmented reality goggles to hydrogen fuel cells captured the eye, and exhibitors unified under the promise of a more regulated future for drones. One that will continue to push public perception from toy to tool.

Here is a recap of the stories the MarketScale team and I shared from InterDrone, each unique and hitting on important innovations across industries like Energy, AEC, Pro AV and Food & Beverage.

Like any great trade-show, I had to make sure I was front and center for the opening keynote presentation. Daniel K. Elwell, Acting Administrator of the Federal Aviation Administration, started off the grand opening addressing what is on everyone’s mind in the drone industry: regulations.

Opening keynote speakers are already digging in to the revolutionary power of drones, but not letting people forget that public opinion is hazy.
“Opinions on drones are still being formed, and that’s in your favor.”
-Daniel K. Elwell, Acting Administrator of the FAA#InterDrone pic.twitter.com/6op1TUU4zz

Though regulations do exist, they are varied, unstandardized and unclear. What Elwell conveyed and what I saw from the guests at InterDrone was that users, pilots and manufacturers are all eager for more regulations. Public perception on drones is still iffy, and like autonomous vehicles, a life-threatening mistake could pull drones from the sky forever.

Elwell urged to the crowd of nearly 3,500 people to work together as a community and with the FAA to put regulations in place—not to punish drone fliers, but to keep them safe and to ensure a future where drones are a natural and secure part of our airspace.

One of the biggest roadblocks to full drone integration into our airspace falls on the inability to universally ID unmanned aircrafts.
“We have to be able to identify every drone in the airspace and who’s operating it.”
-Daniel K. Elwell, FAA#InterDrone

Powerful words from Elwell for a conference hall full of drone professionals.

“If you share the FAA’s goals of fully integrating drones into our airspace as soon as possible, don’t just think the business case…think the safety case, because they go hand in hand.” #InterDrone

While on the trade-show floor, I could not help but be overwhelmed by the varied applications for drones already in use and the applications that will soon achieve what was previously impossible.

A classic industry for UAVs is AEC; Goldman Sachs recently estimated the construction industry would account for around $11 billion of the $100 billion market share from UAVs worldwide. Still, the issues that plague AEC drone-users persist. With a growing market and problems to fix, innovators in the space are beginning to stand out. Accurate data collection and analysis as well as getting drones into dangerous spots efficiently are a major challenge in AEC.

Two of my conversations at InterDrone gained insight on these issues. Check out this article on Epson’s Moverio Glasses, an augmented reality solution that increases a drone pilot’s situational awareness without ever taking their eyes off the sky while protecting their eyes from worksite hazards.

Also give this podcast a listen with Propeller Aero’s Shaun Macintosh, who is providing supplemental technology that improves site-mapping and surveying data by providing fixed and flexible reference points, something a lot of professionals do not even realize they need.

The bulk of conversation around drone technology over the past year has been about validating the effectiveness of drones on every level. This battle for positive public perception is not over, and neither is innovation in the space.

As the tool value of drones reaches a point of common sense, new conversations arise. A big one that I noticed while at InterDrone was finding the right way to fuel commercial drones. Consumer drones have it figured out already; low flight times and minimal payloads means a lithium-ion battery will do the trick.

For drones conducting three to four hour Beyond Visual Line of Sight (BVLOS) flights with multiple payloads and functions, a battery just will not cut it. That’s why big players in the drone space are bringing hydrogen fuel cells to commercial missions, extending flight length and expanding capabilities.

Listen to these two podcasts I conducted from the trade-show floor with Doosan & Intelligent Energy, diving in to the benefits of hydrogen fuel cell technology, hybridized power and the revolutionary applications a fuel cell will empower.

The agricultural industry benefits tremendously from drone technology and is another example of the autonomous trend sweeping through farmland across the United States. Most large farm operations use automated tractors on their land, and with a decline in farm workers putting a stress on the nation’s $45 billion agriculture industry, robotic harvesting machines could be one of the answers.

Drones step in in similar ways; Todd Colten, Chief Aerospace Engineer for Sentera, showed me how impactful and integrated digital agriculture devices can be. Drones can measure plant light wavelengths to measure crop health and growth, and that is just scratching the surface.

I also had a great conversation with Uzayr Siddiqui, CEO of DroneEntry, who is creating a platform for drone pilots to build their portfolio and grow their individual skills. Piloting drones is not a skill that once learned can be applied to every industry; each application has its own specific needs. Especially in agriculture, being able to fly your drone to get the right data, analyze it and communicate it back to the farm can make or break getting food out to grocers and on to the kitchen table.

Give this article a read that dives in to how companies like Sentera & DroneEntry are giving farmers the power of data.

THE NEVER-ENDING POSSIBILITIES OF GEO-MAPPING TECH

GIS technology is not anything new. What I did not realize until InterDrone was the seemingly limitless amount of applications for location analytics, and how drones are putting that data into the hands of professionals in industries from banking, to construction, to retail.

I had the pleasure of speaking with Peter Becker, a senior product manager for Esri, at the conference. Esri, an industry leader in geo-spatial technology, knows the value of data in these spaces, but also knows that data is not enough. It is when the data is layered that it is most effective.

Give this podcast a listen with Becker as we go in-depth on how drones are bringing geo-mapping to new spaces and how companies can best leverage this plethora of insightful data.

New technology brings the same fears. At InterDrone, no one could avoid the topic of public safety and how drones are still an innovation that brings fear to some in the public.

The industry is at a tipping point; with public perception still undefined on whether to accept drones with open arms, a fatal mistake could crush the industry. This puts drone professionals in a position of not only preventing tragedy-by-drone, but also prevent tragedies with drones.

Give this comprehensive piece a read where we dive into the varied aspects of public safety in drone technology, from Foxfury’s high-powered lights for search-and-rescue missions, to Flyability’s Elios drone making difficult indoor drone exploration a breeze, to SCI Technology’s Aeroguard drone interdiction system protecting the skies from bad actors. All bring their own unique perspective to the importance of public safety, and each fill a space that is in desperate need of filling.

For more interesting public safety applications from a Pro AV perspective, give this podcast a listen with Aharon Kamhaji of Amimon, who is helping bring zero-delay monitoring for drones at large distances, giving first responders and law enforcement real-time capabilities for saving lives and apprehending criminals.

What is a trade show without a little a fun? I love Twitter threads, and with endless pun possibilities, I figured I would get some one-sentence passion from exhibitors at InterDrone as they described what makes their products unique, and how they bring tangible solutions to professionals. I like to call these brief shout-outs– #DronesWithoutDroning.

”When it comes to drone tech, ours have the ability to illuminate what the drone is able to see, and that’s just huge, because the more light you can put on the subject, the better intel, the better picture.”
-Antonio Cugni of @foxfuryLED #DronesWithoutDroning #InterDrone pic.twitter.com/6G6ey1MBNS

“Sentera is bringing actionable intelligence to growers on the ground from planning to data delivery, so you can more efficiently produce.”
-Todd Colten of @sentera_uas#DronesWithoutDroning #InterDrone pic.twitter.com/0c3xx9alMU

Wow, that's amazing!" and "Looks like you're having a blast!

Being the North American epicenter of drone innovation made InterDrone a must-attend event, and I am so glad I did not miss it. If there is one thing to take away from the conference, it is that we have not even scratched the surface for drone applications.

However, to ensure a bright future for drones in our airspace, we must come together as a collaborative community, whether that is in the form of empowering pilots or powering drones. We are not far from the day when drones flying above us is commonplace; drone professionals must keep butting their heads together and finding creative ways to propel drone technology to new heights.

I am excited. Are you?